A fruitful meeting was held with Shri Eknath Shinde, UDD Minister, Minister for Urban Development & Public Work on 21st December 2021. The meeting was held on Suggestion about payment towards various premium.

In December a breakthrough meeting was held with Shri Jitendra Awhad, Housing Minister on 9th December 2021. The meeting was held on Joint Venture Policy with the dual objective that MHADA should now spread out of Mumbai.

The policy is expected to be ready within a month. Which will also benefit the common man. Lands will also be developed. It will be seen that the government will also get good revenue.

The prayer of CREDAI-MCHI about rationalisation in the land ASR to be 1/3 of sale rates was positively considered by the IGR. He assured to work out a favourable mechanism, while finalizing the Land ASR for next year.

Shri Hardikar conveys that levy of stamp duty by adopting the value of the land at 25% of the ASR for Slum development issue is already under consideration. On E–Registrations process, he informed that a new & simplified version has been developed as per new circular from IGR dated 14 Oct 2021 and assured to conduct technical training session at CREDAI-MCHI office for the benefit of the developers. IGR assured to review the request of change in proof of tenancy timelines in the Permanent Alternate Accommodation agreement.

A breakthrough meeting was held on 29th October 2021 on the insistence of CREDAI- MCHI by the Civil Aviation Authority, which was represented by Shri Iqbal Singh Chahal, Commissioner (MCGM), Shri Bhushan Gagrani (IAS), Principal Secretary, UD, GoM. The representation of this meeting was done by the CREDAI-MCHI team led by Shri Shahid Balwa, Shri Domnic Romell and Shri Kunal Chheda. A detailed presentation was put before the committee constituted for reviewing of building height regulations and the committee has assured to revert at the earliest on the suggestions put forth by the members of CREDAI-MCHI.

CREDAI-MCHI President Shri Deepak Goradia lead a delegation of members of CREDAI-MCHI including Shri Nayan Shah, Shri Boman Irani, Shri Domnic Romell, Shri Shahid Balwa and Shri Dhaval Ajmera for some very important pending points in the office of Shri Bhushan Gagrani (IAS), Principal Secretary, UD, GoM, which included a request of clarification from the UDD on development cess, request for a pending hearing in the matter of extension of the notification dated 19/8/2019, request for open space deficiency to be calculated only once in the lifecycle of the project, request for 2nd staircase in building over 70 m to be made free of FSI and premium, discussion on the requirement of open spaces for artificial lighting and mechanical ventilation for residential and commercial buildings in DCPR 2034 and for modification in 14 (B)(H) and Note II(A) and (B) of DCPR 2034.

The meeting was represented successfully and the Hon. Principal Secretary assured to look into the representation made and revert in a positive time frame

In the month of October 2021, a very successful meeting was held with Ms Manisha Mhaiskar,  Principal Secretary, Environment, GoM on a resolution on the time-consuming process of issuance of environmental clearances to projects in the MMR region. CREDAI-MCHI requested the Hon. Principal Secretary to consider the projects with the valid concession report issued by planning authorities in accordance with local planning regulations while granting the environmental clearances. It was discussed with the Principal Secretary that along with IOD/IOA/concession documents, LOI issued by MCGM/SRA/MHADA shall also be considered as a valid document for submission for Environmental Clearance.

Meeting with Shri B. Venugopal Reddy

On the 3rd and 12th of August, meetings were held with Shri B. Venugopal Reddy (IAS) Principal Secretary (Forest)

Revenue & Forest Department at his office. The topic of discussion was the Flamingo Matter. Shri Reddy had moved the file to the Hon’ble Chief Minister’s Office for his approval and later it was sent to the Centre (MoEF Dept.) for final Gazette. The MoEF department had scheduled a meeting in Delhi on 17th August 2021 to finalize the ESZ for Thane Creek.

During this year, three a total of successful meetings with Shri Iqbal Singh Chahal – Municipal Commissioner MCGM were held. In the first meeting, it was requested for all payments against the self-declaration by the project

proponent for the plans approved by Building Proposal Department to be made until 31st December 2021.

In the other two meetings, the guidelines for process building proposals and the difficulties of the Real Estate sector were discussed. The meetings were attended by Shri Deepak Goradia, President, CREDAI-MCHI, Shri

process were discussed. Smt. Mhaiskar responded to every issue positively and agreed to ease out the

Principal Secretary of the Housing Department. The first meeting was to discuss CREDAI-MCHI’s

suggestion of Repeal of the MOFA Act. In another fruitful meeting the Housing Policy was discussed. These meetings were attended by Shri Deepak

constructive suggestions that were centred around the same issue. The meeting was fruitful, as the respective

In the next meeting, issues regarding the Housing for Police on Private Land were discussed. The next meeting discussed the Town Level Amenities and City Level facilities under the Integrated Township Project (ITP) to be

On 29th December 2020, a meeting was organized with Shri Jitendra Bhople, Deputy Director of Town Planning (Valuation), to accelerate the Request for Recalibration for Ready Reckoner for 2021-22. The CREDAI-MCHI participants for this meeting were Deepak Goradia, PRESIDENT, Mayur Shah, Past President, Harish Gupta and NAREDCO members.

The first meeting was held with Shri Jitendra Awhad and Shri Bhushan Gagrani, Principal Secretary to discuss the MHADA issue. The meeting was followed by another one that discussed the pending issue of MHADA.

In another fruitful meeting, they discussed allowing the clubbing of two schemes u/s. 33(2) with development of proposal under regulation number 30 (Table 12) & 33(7) of DCPR 2034.

The meeting was addressed by Shri Boman Irani, President-Elect, CREDAI-MCHI & CREDAI who

highlighted the excerpts from the recent research conducted by CREDAI National on the Impact of the second wave of COVID-19 on the Real Estate Sector in India.

The meeting discussed the ongoing financial stress in the sector and recommendations were presented to the LIC HFL. The team agreed and supported the issues and had decided to focus more on retail loans.

The meeting was attended by Shri Boman Irani, Shri Pritam Chivukula, Hon. Secretary, CREDAI-MCHI and other Members of CREDAI Maharashtra and NAREDCO.

On 8th May 2021, a meeting was held with Shri Aditya Thackery, Hon’ble Environment Minister and Smt. Manisha Mhaiskar, Principal Secretary (Environment) to discuss the approval based on the conceptual plan. The meeting was attended by CREDAI-MCHI Members, Shri Boman Irani, President-Elect and Shri Shahid Balwa, Member. 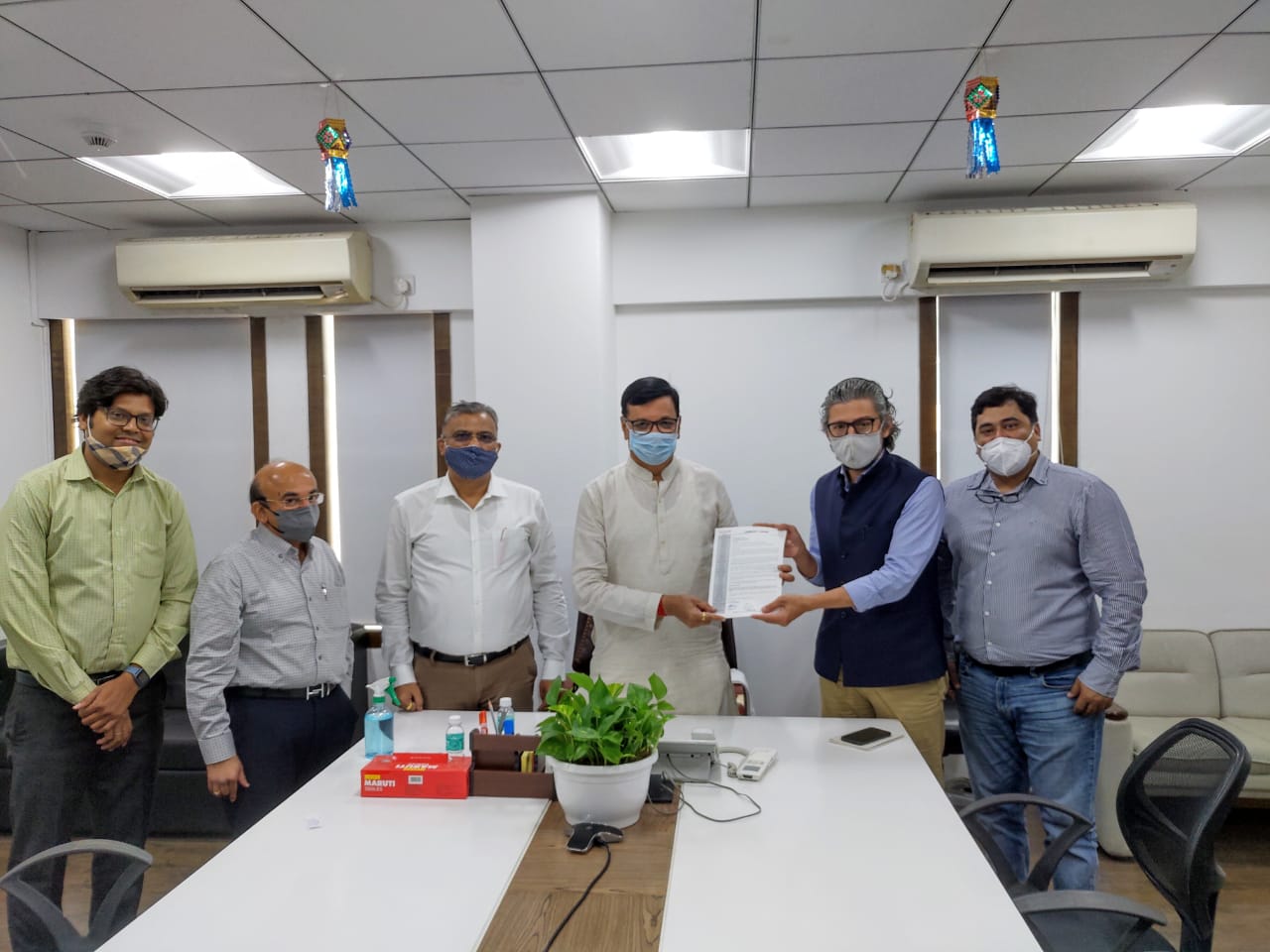 A meeting was held with Shri Balasaheb Thorat, Hon’ble Revenue Minster on 23rd March 2021, it was attended by the CREDAI-MCHI Team led by Shri Boman Irani, President-Elect. The meeting was also attended by Shri Pritam Chivukula, Hon. Secretary, Shri Raijesh Prajapati, Co-ordinator and Shri Rajul Vora, Member. Three major issues were discussed. First, to not change the Ready Reckoner Rate for 2021-22. Second, the Land ASR rate for Mumbai to be 1/3 of Residential Sale Rate, and finally the current rebate of 3% in Stamp Duty to be extended for 12 months.

The Hon’ble Minister was sympathetic to the issues brought up in the meeting and had agreed to discuss the same with the Cabinet.